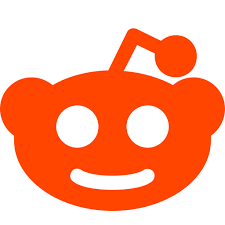 Are Creativity and Intelligence related? How many times have you thought of an out of the box, ground-breakingidea but did not execute it because you thought youmightbe lagging on the intelligence upfront?I'm suremany of you have thought of brilliantconceptsbutthe excitement died the moment you thought, 'If you could do it or not? How wouldyou do it?'because according to you, you are notvery intelligent.And well, you would have had similar experiences at some point or the other in yourlifeso far.

So, the question is - Are creativity and intelligence-related as closely as we think, do they influence the presence of each other, or is there any other fact to be unfolded?

Creativity and Intelligence – An introduction:

Creativity is the use of imagination to generate novel ideas, to see things getting innovated in a new manner, and to use the existing knowledge and resources to create something useful.
Intelligence is the ability to acquire knowledge, to filter the gained knowledge as per requirements, and utilize it accordingly.

The Venn Diagram given below indicates some individual areas that come under creativity and intelligence when it comes to cognitive behavior. 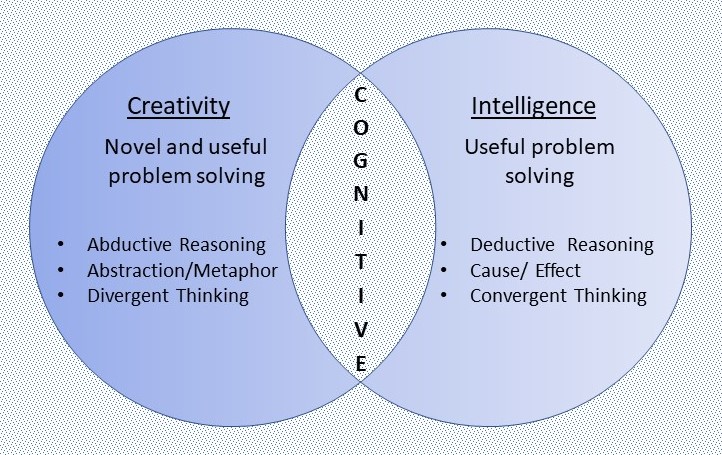 However, Gardner, in 2006, said, ’Although highly creative people tend to be above average in intelligence, a higher IQ does not predict creativity.’

Here comes the concept of IQ. IQ that is an abbreviation for Intelligence Quotient can be defined as a way to measure intelligence. It is claimed by scientists that a person with an IQ of more than 120 can prove to be intelligent and highly creative at the same time but a highly intelligent person would not necessarily prove the same in the creative field.

A lot of ways have been tried to find a graphical relation between both but they cannot be related based on just one parameter. However, a graph, which was released on the website of ScienceDirect, relates the two using several parameters such as correlation using continuous line and segmented regression using dotted lines. Here is the graph: 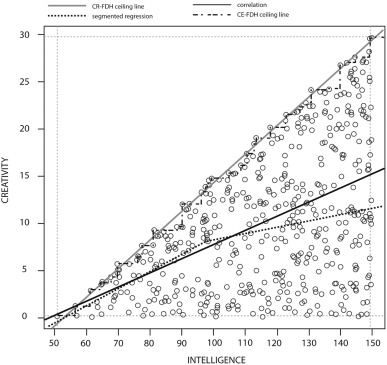 We can conclude that the exact relation between creativity and intelligence cannot be determined by using just one parameter and also, they are not limited to just one particular area or subject. Solving a mathematics problem speedily is intelligence whereas solving the same problem in a different way than others can be called creativity. Inventing a new way of creating artistic effects on paper is creativity whereas retaining the steps of that method to use in the future can be called intelligence.

So the next time something brilliant strikes up in your head, give fire to it instead of just giving it up with a thought that you're not intelligent enough.